The book features dozens of stories that recount memorable games, people and landmark events during this breakout period where Eastern football became the new standard in the Big Sky Conference.

In addition, Delaney, an EWU grad with degrees in both journalism and education, has conducted interviews with several previous school presidents, coaches and athletic administrators. These conversations, which resulted in 22 unique stories for the TRAILBLAZERS chapter deliver insight not only into the development Eastern football, but athletics as a whole at the school.

We revisit the battle to become an NCAA Division I sports program, the Big Sky Conference and the equally groundbreaking move from a state college to regional university.

Plus, 'TAKING FLIGHT' dives into the wild thought that Eastern ought to have not just artificial turf — but RED no less — and how that move has changed the face of not only football but EWU itself.

And while the book admittedly IS NOT a start-to-finish comprehensive history of Eastern football, through the great cooperation of EWU Sports Information director Dave Cook and the Big Sky Conference, there are portions that do touch on a 110-year span of football on the Cheney campus.

After OVER 2 years of work, it’s exciting to announce that the book — consisting of 472 pages in a large format paperback format featuring over 500 photos — is available for purchase!

Individual copies of 'TAKING FLIGHT' will retail for $34.95 with discounts for multiple book purchases.

Visit the CONTACT page to place your order and fill out the form below with any special instructions.

An INCREDIBLE story is NOW for sale! 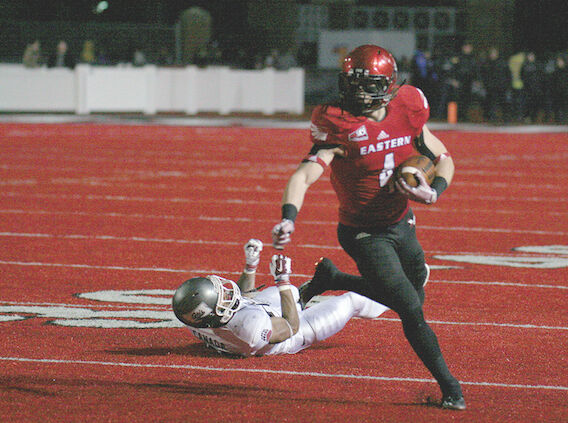 Todd Raynes leaves Montana's Jordan Canada in a dusting of SprinTurf pellets on his way to a "pick-six" touchdown run in the Eagles 2014 37-20 playoff win over the Grizzlies.